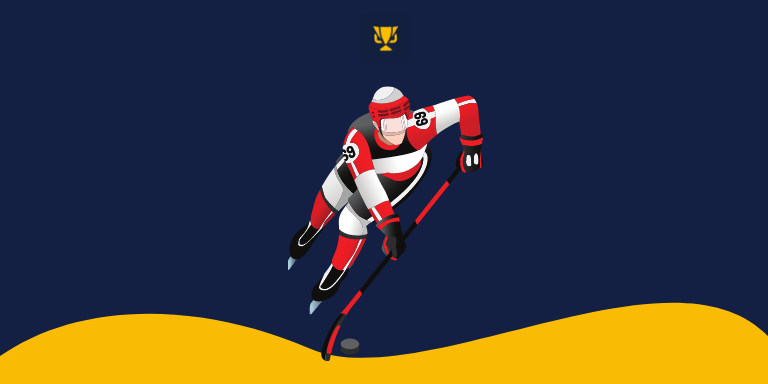 Beginning only in Canada and cold-weather markets, the NHL has rapidly expanded across the United States. Now, even hot states such as Arizona, Texas and Florida are treated to their own NHL teams. The league has also expanded twice in recent years to Las Vegas and Seattle. This availability and the world-class NHL talent has made the league a popular option on sportsbooks.

There is rarely a shortage of options either. The NHL has the longest schedule of the major sports leagues, covering 244 days of the calendar year. This means on most days throughout the year, there will be multiple NHL games for betting. Making bets on the NHL can be a more difficult endeavor than on other leagues mainly due to its unpredictability. However, learning the basic NHL betting types and features will truly advance a player’s confidence when wagering.

Betting on the NHL is most often done in one a few ways. The wager types on the main NHL betting line are the moneyline, over/under and with the puck line. The nuances of the league, however, means that these NHL betting types have a little more variation than first appears. To understand NHL betting lines, we will need to take a closer look at which factors make the difference between successful bets and also how a typical NHL game will impact them.

The simplest bet to make on NHL games is the moneyline. This bet type appears on the sportsbook’s main line for NHL and is simply a bet on which team will win the game. Since the NHL is a highly competitive league this bet can be tricky to consistently get right. The biggest nuance that comes with an NHL moneyline bet is the possibility of overtime.

While sportsbooks usually include overtime in the regular moneyline bet, NHL seems more often to be the exception to this. For moneyline bets without overtime, there are three possible outcomes to each game rather than two. Tied finishes in the NHL are common enough that picking a moneyline bet with overtime included will prove to be a valuable decision.

Another bet type featured on the main line, the puck line in the NHL is just another term for a spread bet. To successfully cash this NHL bet type, the favored team must win by more than the sportsbook spread, whereas the underdog can either win or lose the game by less than the spread. Since NHL is such a competitive league, and quality differences between teams aren’t high, the puck line is always set at 1.5 goals.

The main betting perk that comes with the puck line is the higher odds than the moneyline for the favorite and better chances for the underdog. The two most common final score lines in the NHL are 3-2 and 4-2. The latter beats the puck line, while in the former the puck line makes all the difference. Playing the puck line for underdogs can be advantageous in close matchups, and for the favorites when there is a serious mismatch.

Totals Bets on the NHL

The third and final NHL bet on the sportsbook main line is an over/under wager. This challenges bettors to correctly predict whether the total number of goals in the game will be higher or lower than the sportsbook’s number. This number will fluctuate for each NHL game, but will almost always settle in a range from 4.5 up to 6.5. Live betting can be a useful strategy here, as players can first get a better understanding of how the game is being played before wagering.

Totals, or over/under bets in the NHL also come with many different lines and variation. The bet is still the same, but there are many other options other than total goals to stake on. Totals bets on the NHL can include odds for total number of individual team goals, for each period, penalty time, etc. Sportsbooks can offer different variations of this bet, but the puck line is always for total goals scored.

Putting together parlay bets is popular for many leagues, and especially in the NHL. Parlay bets are two or more combined betting lines placed under the same wager. For this bet to win, all bets included in the parlay must hit. Each additional betting line added to the parlay means higher total odds, but with more risk. For NHL betting, especially moneyline bets, odds are often very high (+140) on both teams. This means that with only a couple of bet selections we can put together a parlay with very high odds, making it a popular option for the NHL.

Betting on the NHL can be done at any time throughout the year with the use of futures bets. These are long-term wagers that are made on Stanley Cup winners an on individual award recipients like the Hart Trophy for the MVP and the Art Ross Trophy for the highest scorer.  For these bet types, sportsbooks do not limit the number of selections players can wager on. Thus, betting on ten different candidates for the Art Ross trophy or on eight different teams to win the Stanley Cup is a viable option.

Rounding out popular NHL betting types we have prop bets, of which there are a lot of for this league. Prop bets include any bet that does not directly affect the final outcome of the game, and contains a large variety of options. Some of the more common are whether both teams will score or not, the time range of the first goal, team to lead by a certain number of goals and more. Players using prop bets in particular can benefit massively from live betting.

Key Strategies and Features of the NHL for Betting

The NHL has developed and changed its style of play quite substantially over the decades.  While before it was known for its physicality and grit, today’s NHL puts an emphasis on a quick, wide open style of play. This can be most easily observed in the higher number of goals per game. In the 2019-20 NHL season, there was an average of six goals per game, the highest since the 2005-06 season.

Another defining feature of the NHL is its sheer competitiveness. The standings are almost always a close race in each of the four divisions, and seeing one team lead by a large margin is incredibly rare. Multiple playoff spots in the NHL each year are only determined by a couple of points. The level of talent, familiarity, and determination of each team also leads to very close games with high odds on the winner.

Wide-open, quick-paced play dictates today’s NHL. Teams are less likely to battle it out physically and build up play, opting instead to push the puck up ice and quickly get scoring chances. The result is some of the highest goals per game averages in the league’s history. For sportsbooks, 5.5 and 6.5 will be the golden numbers for bets on goal totals.

When betting on NHL goal totals, it is important to first look at each team’s starting roster. Despite the high-scoring offenses of today, defense and goaltending is still impactful. Star defensemen and goalies can severely limit an opposing team’s offensive threats leading to lower goal totals. This is also pretty consistent each game. If a particular team lets in four or five goals in a couple of games, it’s likely they will continue this trend consistently throughout the season.

Close Competition in the NHL

The level of quality between teams in the NHL is marginal at best. Teams designated as the underdogs in this league win games more than any other professional league. In the NHL, the underdogs win the game nearly half of the time. This results in extremely high moneyline odds for both teams, regardless of their status. In many cases, the odds for both teams will be nearly identical.

Games in the NHL also go to overtime around 25% of the time. Since the competition is so close and with the possibility of overtime, even teams that are highly favored to win a game will have abnormally high odds. This leads to the preference of bettors for making small NHL parlay bets. Only guessing two games correctly will cash a big payout, making them a particularly popular choice.