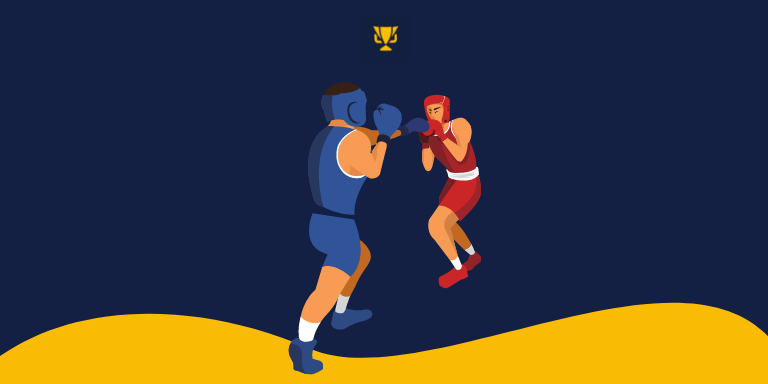 The UFC is one of the newest professional American sports leagues, starting back in 1993. Despite its relatively youthful age, it has gained massive international popularity for professional and diverse approach to combat sports. The UFC is a league where professional fighters use their experience in mixed martial arts (MMA) to best their opponent in five rounds.

Quickly becoming one of the most popular sports to watch, the UFC also has a large betting selection on US sportsbooks. These betting lines allow users to make cash bets on various outcomes for all UFC events. There are a lot of different options for wagering on the UFC that are completely foreign to other sports. Through this guide, we will come to better understand what each bet means as well as some common features of the competition that will give us even more information on what to expect.

The Main Bet Types for the UFC

Since the UFC is not a typical sporting competition, some of the main bets here will be completely different than other sports and leagues. Others, will have the exact same principles and can be quickly understood. For fans of boxing, the main UFC bets should look familiar as the competitions are not truly distinct in the aspect of betting. In the UFC, there is only one main bet, and that is the moneyline. However, we will examine other popular options as well.

This is the most popular bet on the UFC as well as the simplest to make. A UFC moneyline bet is a wager on which athlete will win the fight. There are only two possible outcomes for this bet, as there are no ties in the UFC. This makes the moneyline even more ideal, as a bet with only two outcomes is much easier to win than one with three like in other sports.

All we need to do here is to pick which fighter we think will be victorious and place on them. If they win the fight, then the moneyline will win as well. While there are many different ways that a fighter can win which are important for other bets, the various techniques do not matter here. As long as they win the fight the bet will cash, regardless of how they won.

To win this bet, we must correctly determine whether the number of rounds fought will be higher or lower than the sportsbook’s number. UFC fights can end at any time whether in the first round or if it takes all five to decide the winner. Thus, the over/under number given by the sportsbook mainly depends on the techniques used by the fighters involved. Fights between two knockout artists will have a low over/under number for example.

How the Fight Will Be Won

Nearly every fight in the UFC is unique, and that is because each fighter has their own style, preferences and experience that they are bringing into the cage. UFC fights can end in a number of different ways including knockouts, submissions, disqualifications and by judge’s decisions. For higher odds than regular moneyline bets, sportsbooks offer the option to predict not only who will win the fight but how they will win as well.

While it may be a difficult bet to cash due to its unpredictability, a lot of information is available before the fight that can help. This most notably includes each fighter’s preferred technique. Even though most fighters in today’s UFC are masters of multiple styles, they will usually have one specialty that can help bettors to predict how they will look to end the fight.

For bettors looking to take a big risk for a major payout, they can bet on three of the main UFC bets combined. This includes the moneyline bet, how the fight will be won and in which round the fight will end. Winning this bet requires a lot of knowledge, experience and some luck from bettors as everything will need to line up perfectly to win. An example would be a bet on Dustin Poirier to win by knockout in the third round. While this wager is difficult to win, the payout for a combined wager is much larger than for the individual bets included.

The Characteristics of UFC for Betting

When we examine the makeup of the UFC as a professional league, a couple of major characteristics stand out. The first is the importance of each fighter’s style and technique. These can be compared to a football team that puts heavy emphasis on its passing game. For UFC fighters, this means mastering and using a specific style of MMA. The variety of specialties between fighters has a big impact on how two opponents will battle each other.

Another distinct feature of the UFC is the amount of coverage and access the fans have to each fighter. Before every fight, especially for main events, there are numerous press conferences, interviews and other events that allow bettors to examine each fighter and to better understand what to expect from them at their next event since they correlate well with sportsbook betting lines.

Every fighter in the UFC has their own style that makes them a unique opponent. These can also determine much of how a fight will play out. The most common styles today include Brazilian Jiu-Jitsu, wrestling, kickboxing and grappling. While many fighters will be experienced in multiple styles, there is usually only one true specialty. Knowing this will give bettors a large advantage as it can help determine many outcomes such as when the fight will end, possible mismatches and most importantly how the fight will be finished.

In the weeks leading up to every UFC event, there will be press conferences and in-depth interviews with the fighters. These allow bettors to gain incredible access to the athletes that is not available in other sports. There are no bounds to the information that can be obtained here. What we look for the most are the fighters’ confidence going into the event and their personal relationship with their opponent. Fighters will often even completely lay out their plans going into the fight, telling us exactly what to look for when betting.